Auction Brought the Reconstruction Over 20 Thousand- and its not over yet!

On Wednesday October 30, 2013 we tried it for the first time. And not just for us- it was the first art auction in Zilina history, and of course we couldn’t have done it without professional help.  We are aware of the distance between the world of art (exhibitions and art), and the arts (trade and markets), and therefore we want to thank SOGA Auction House and (licitatorke) Nine Gazovicova for their selfless help on the preparation.  Of course we want to express the same gratitude to the artists and owners of the works donated to our cause, especially those who gave the entire proceeds to the reconstruction.  Those who did not, of course, we understand their reasons (cost of materials, etc), and are still thankful for their contribution.  At the auction, the aim of which as mainly benefit, we acknowledge that the bidders were more philanthropists than collections.  So thank you, philanthropists!

We are pleased that our project appeals to artists and are excited to work with them once we open.  It is already clear that this will not be our last auction.  Throughout October we had apologize many times to artists who, after we publicized the auction, were almost offended that we did not call them.  We promise, this was our first auction and the pieces were not a reflection of our priorities but rather a rapid selection of what was available.  We certainly didn’t want to forget anyone and hope to repeat the auction.  Many of you have already promised works, which we greatly appreciate.  Thank you.

We are proud that the among those who contributed to our first auction were Roman Ondák, Dan Perjovschi, Rudo Sikora, Milan Adamčiak, Daniel Fischer, Svätopluk Mikyta and Plamen Dejanoff, as well as our young friends Jarmila Demjanovič, Tomáš Džadoň, Boris, David Mitríková, Patrícia Koyšová…We were unsure if their works would sell, as contemporary arts still don’t have a wide audience in this town.  The biggest bidding war was over a small painting by Doroty Sadovskej, which rose from three hundred to almost two thousand euros.  We were, however, surprised that pieces we thought would sell immediately, such as those by Igora Korpaczevského, Krištofa Kinteru, Andreja Dúbravského and Ašota Haasa did not find new homes.  But this is good news for you, as you can now get them at starting prices.  The Dúbravského and Kinteru pieces have already been sold, and brought the auction proceeds up to twenty thousand euros!  Also available at a starting price is an excellent photograph by Lucie Nimcoveji and Jara Kyšu, and a photo book signed by Martina Kollara.  These pieces will remain with us and we are confident they will eventually find new owners.  Other works, especially those from collectors, we have decided to return.

We sold several works from artists no longer with us, including Andreja Barčíka, Josefa Čapka, and Františka Kupku.  The most expensive work sold at the auction was a Voskovec and Werich from Kolomana Sokola, whose price climbed to 4.5 thousand euros!  Unfortunately, a Miloša Bazovského, which came to us from the collection of Bohumil Hanzel, did not sell, but we are sure it will be bought at its starting price (all proceeds with go to the reconstruction).

Finally, we want to once again thank the artists and art owners- as well as the new owners.  Photos of the auction by Mareka Jančúcha and Natálie Zajačikovej can be found at www.flickr.com/novasynagoga. 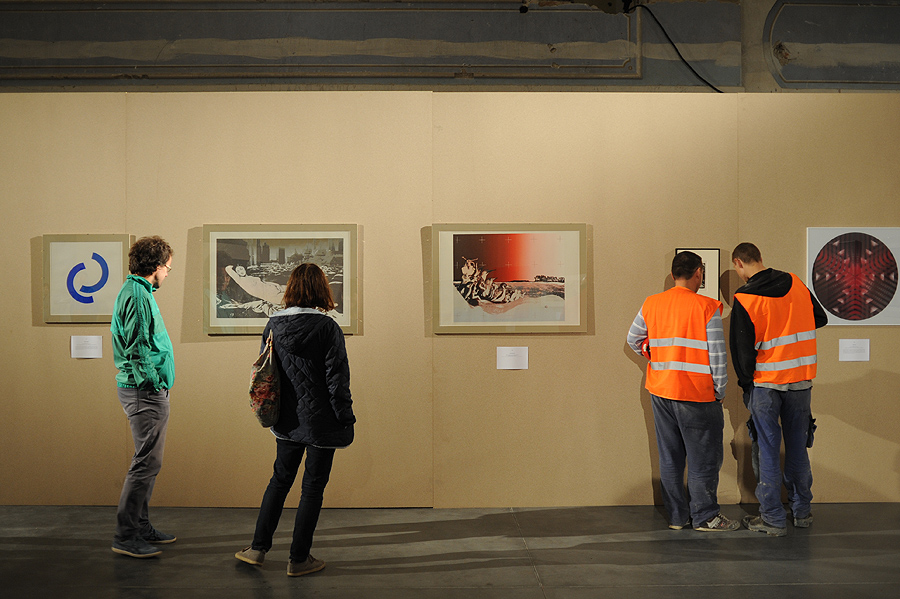 Complete auction results can be found below

If you would like something smaller we still have a few signed limited edition prints of drawings of the synagogue by German artist Matthias Beckmann (pictured left).  One can be yours with a 30€ contribution to the reconstruction.  Write to Robert Blasko if interested.